A Look at Thursday’s Market: The overall market moved moderately lower in a very broad based move that saw essentially every sector  of the market I track move lower as well.  The sell off continues, and a lot of these sector indices look like they have a lot farther to fall.  The utility sector continues to be very hard hit.  I originally discussed my thoughts on the utility sector in the Sterling Market Commentary for November 7th.  I think that we are entering a bear market for the utility sector, and given the current regulatory climate, I think that is going to translate into sharply higher utility bills for consumers.  For a variety of reasons, I think discretionary spending, which is that extra money you have to spend after you pay your bills, is going to take a sharp drop in 2013.  Fiscal Cliff or not, I think there are strong head winds facing the U.S. economy; and what we are seeing now is the market waking up to that fact.

A Few Thoughts on Friday’s Market:  In looking at the charts from the recent tradings sessions, it is clear that the current sell off is something more than just a short term pullback. In a short term pullback or market correction there is usually some sector of the market that performs well. That is clearly not the case with the current market.  What we are seeing right now is an across the board sell off, with several sectors being hit far worse than the major market indices.   Just take a look at the utility sector discussed above and earlier in the Sterling Market Commentary for November 7th, 2012.  I’ve included a chart of the Dow Jones Utility Average below for your review.  I think the utility sector is a bell weather for the larger interest rate sensitive segment of the market.  The utilities were among the first to move higher following the financial crisis and the implementation of the Quantitative Easing Programs, and they now appear to be the first to steeply sell off.  The utilities could easily be signalling the start of a larger sell off by the more interest rate sensitive and high dividend paying companies. 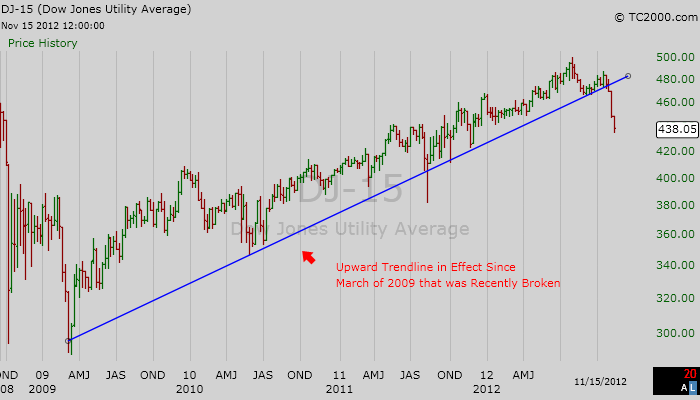