A Few Thoughts on Friday’s Market:  Today’s trading session is a shortened, half day of trading. I am not really expecting much to happen today.  I think the market will get back to business next week.  At that point in time I would not be surprised to see the market resume its downward trend.

With the rally in the market the last few trading sessions one of the key things I have been working on identifying is whether the overall market is starting a new upward trend, if this is a standard retracement, or is it just a bump in the road.  Long term readers of my newsletters and blog will know that I consider a retracement to counter move of a longer term movement that is between 1/3rd and 2/3rds of the previous movement.  If the move fails to reach the 1/3rd mark, then it is not a retracement, if the move exceeds the 2/3rds market, then it is the start of a new longer trend.  The Dow Jones Industrial Average has declined from a high of 13,610.15 to a  low of 12,542.38  This is a decline of 1,067.77 points, 1/3rd of the decline is 352.36 points and 2/3rds is 704.73 points.  That means for the Dow Jones Industrial to reach retracement range it will need to rally between 352.36 to 704.73 points from its low point of 12,542.38  That would put the retracement range on the Dow Jones Industrial Average between 12,894.74 on the low side and 13,247.11 on the high side. I have inserted a chart below for your review. 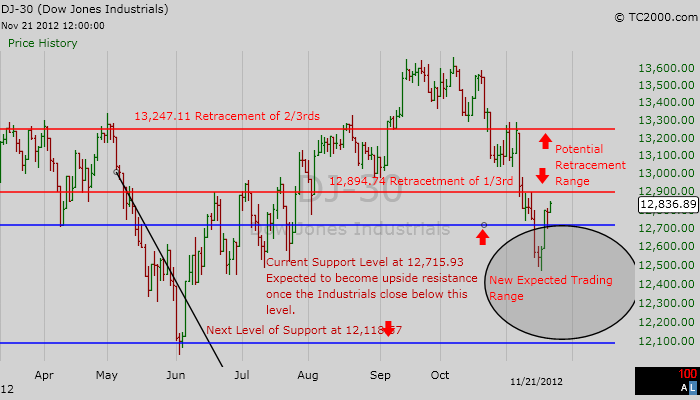 Anything less than this is just a bump in the road on a larger move lower.  Anything greater than this signals a new rally and a possible testing of the market highs set earlier this year.  However it should be noted that a move into retracement range, followed by a move back lower would indicate that the recent market decline was basically the 1st leg  of 3 probably downward legs, each being successively lower.