A Few Thoughts on Thursday’s Market:  In looking at the charts from Wednesday’s trading activity it is pretty clear the market has started a new downward trend that is going to last for a reasonable period of time.  I do not see this sell off being the result of the news of the weakening economy is Europe, as that news has been on the proverbial table for quite some time.  There may be some credibility to this being an election story,  most of the people who I know that work in the finance and investment banking field were hoping for a Romney victory.  Maybe they let their emotions get the better of them, or the misjudged the mood of the country.  However, even if the election effect is true,  I see that as only being a very tiny factor on the markets.  I think that there are serious structural issues that are coming to head in the next several years, and the only reason why the market hasn’t reflected this sooner is due to the efforts of the Fed to manipulate asset values higher.  The charts very clearly show that essentially every sector of the market is in the midst of a move lower.  In my opinion this is signalling a pullback in the economy, and the possibility of a recession in 2013. 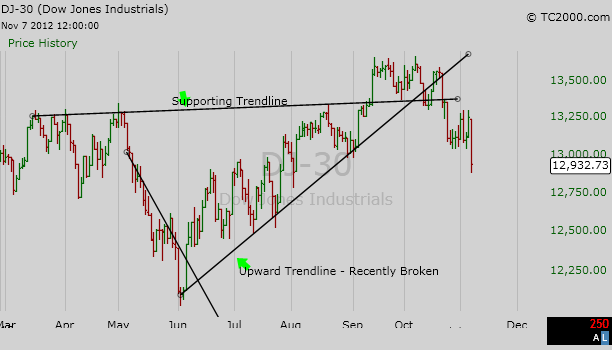