A Look at Wednesday’s Market:  The overall market moved moderately lower in a broad based move that saw the majority of the various sector indices I track move lower as well.  There was weakness in the High Tech,  Transports, Gold/Silver, Oil Services, Commodities, Natural Gas, Biotech, Banking, Consumer, Insurance, and Airlines indices.  There was strength in the Telecom and Chemicals.  The Healthcare related indices were mixed.  There was strength in bonds as interest rates moved lower.  In the commodities markets,  Oil was lower by $0.94 to $85.73 per barrel, and Gold was lower by $7.80 to $1,701.60 per ounce.  In the grain market, Wheat was higher by $0.152 to $8.840 per bushel, and Corn was lower by $0.014 to $7.544 per bushel, while Soybeans were higher by $0.172 to $15.704 per bushel.

A Few Thoughts on Thursday’s Market:  In looking at the charts from yesterday’s trading activity, it was very clear that every index I follow is in a clear downward trend.  It looks like the overall market is clearly experiencing what is at least an intermediate term downward movement, that has the possibility of developing into something longer term in nature.  It was disappointing yesterday that there was not some sort of close higher by the major market indices that could have counted as a bounce following the Tuesday’s sharp move lower.  While the early, pre-market futures are to the upside as I write this, it is important to remember that we have initial and continuing jobless claims being released this morning as well as durable goods orders later in the morning.  Both of these economic numbers have the ability to change the direction of the market.  Additionally, and very importantly we have advance GDP results being released tomorrow (Friday).  I think that there is a very good chance that weakness in any one of these numbers will be seen as confirming that the U.S. economy is contracting and that there is risk of recession in 2013. This would send the market sharply lower from its present levels.

In Monday’s edition of the Sterling Market Commentary,  I wrote that the MS. Consumer Index ‘CMR’ was still in an upward trend, and that if it broke this upward trend this would be seen as a potential confirmation of consumer weakness and that the US economy was headed back into a recession.  Since then,  the ‘CMR’ has broken this upward trend. I have inserted the chart below for your review.  Yesterday, the ‘CMR’ closed at 830.52  In looking at the chart of the ‘CMR’, I think that there is a very good chance that it will continue to move lower and test 811.32 on a closing basis, and if it breaks support at that level then we could see it test 801.42 on a closing basis.  Furthermore, I think one could look at the chart of the ‘CMR’ and see it as an indication of the growing ineffectiveness of the Fed’s Quantitative Easing programs. 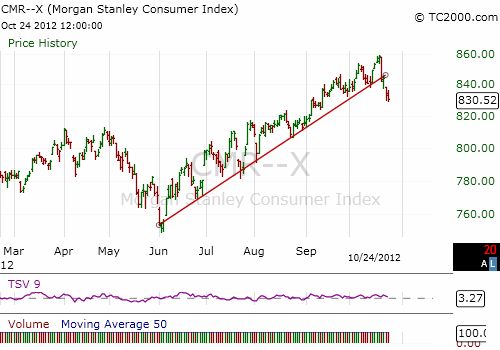