A Few Thoughts on Thursday’s Market:  In looking at the charts from yesterday’s market activity, what caught my eye was the price of oil which closed at $95.23 per barrel.  In the Thursday’s January 10th edition of the Sterling Market Commentary I wrote about the price of Oil testing $94.74 per barrel.  The price of Oil closed above that level on Wednesday January 14th.  Since then, the price of oil has remained above $94.74 for over a week now.  I thought today would be a good time to take an updated look at the chart of Oil which I have inserted below for your review. 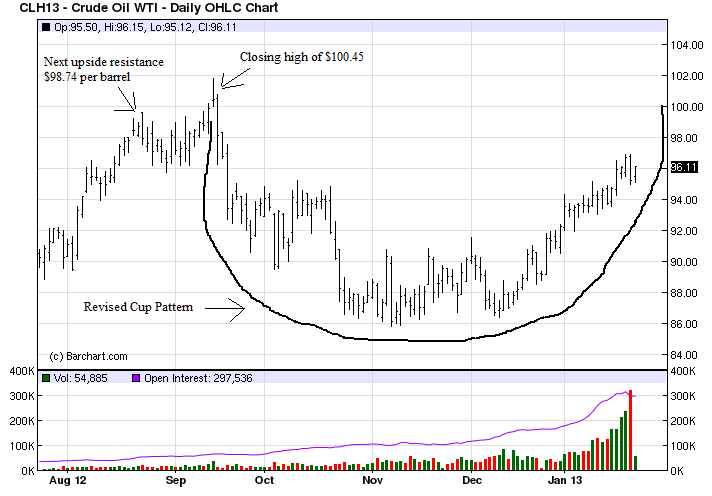 What I see in the chart is the price of oil continuing to move higher and test the next upside resistance level at $98.74 per barrel which was set on August 22nd.  If the price of Oil can close above that price level, then I see it continuing to move higher and test $100.45 per barrel, the closing high for the March contract which was set in mid September of last year.  I have taken the rare step of revising my projections on the cup pattern being formed in the oil market.  Here are my new projection.  If the price of Oil closes above $100.45 per barrel, then it will have completed a cup pattern with a measured move to $114.82 per barrel.  I think that this is significant not only from a trading standpoint, but in that I believe it will have a negative impact on the economy; ultimately hurting economic growth.

The Bottom Line:  I am expecting the overall market to continue to move higher.