With respects to today’s market, I am expecting the overall market to move lower again today.  I think there is a realization that the fiscal cliff is not going to be resolved in a manner that will be favorable to businesses and investors that fund job creation.  Additionally I believe that the public is beginning to realize that the Fed’s Quantitative Easing programs have lost their effectiveness’; and many people believe that the Fed’s Quantitative Easing programs are actually a big part of the problem.  This is forcing a combination of the examination of the valuation models of the U.S. stock market and moves designed to compensate for a rising tax environment in 2013; the net effect is that it is driving valuations and the market lower.

As I mentioned above, the KBW Bank Index ‘BKX’ broke below its 200 day moving average yesterday with its close of 46.68  I have included a chart of the ‘BKX’ below for your review.  I now see downside support on the ‘BKX’ at 41.00 and upside resistance at 46.83  This is obviously a very negative chart pattern, and I think it is worth discussing what it may mean for the U.S. economy.  The ‘KBX’ Bank Index ‘BKX’ is designed to reflect the performance of the banking industry, which is a significant portion of the U.S. economy and plays a very important function in financing the workings of the U.S. economy.  Poor performance of the U.S. Banking sector is not going to be a good thing for the U.S. Economy. Based upon the chart below, I think the KBW Bank Index ‘BKX’ is going to test the lower end of its trading range at 41.00 on a closing basis. 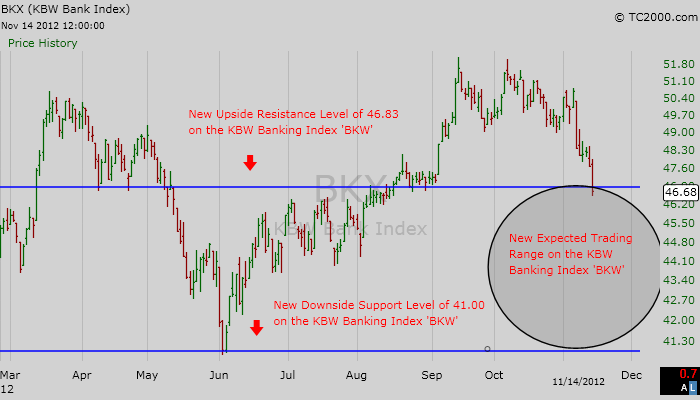