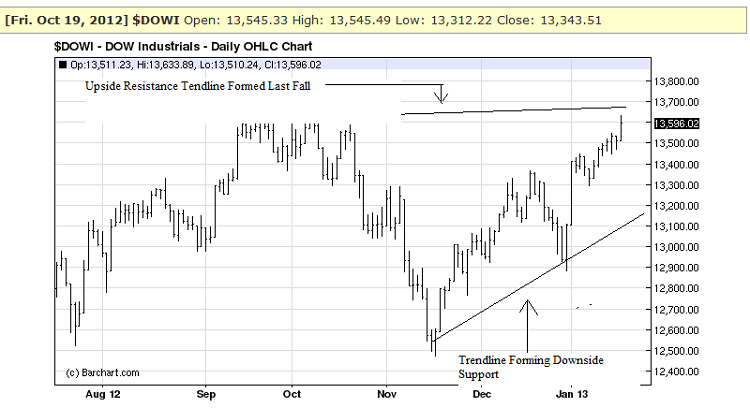 What we see on the chart of the Dow Jones Industrial Average that I posted above is an upward trendline that originated last fall when the Dow Jones Industrial Average previously reached these levels.  We can see that it is upward sloping, but indicates that resistance comes back into play just below 13,700.  The chart also shows a steeply upward sloping downward support line.  Extending both of those trendlines out further than I actually had room for on the chart, would show that they are forming a triangle pattern with an ever tightening trading range.  As I have written about many times in the past,  these triangle patterns almost always signal an upcoming break one way or another.  In this case the Dow Jones Industrial Average will break either very sharply to the upside or to the downside.  I think we will probably see clarification on this over the course of the next 1-2 weeks.

The Bottom Line:  I continue to expect the market to drift sideways with an upside bias.