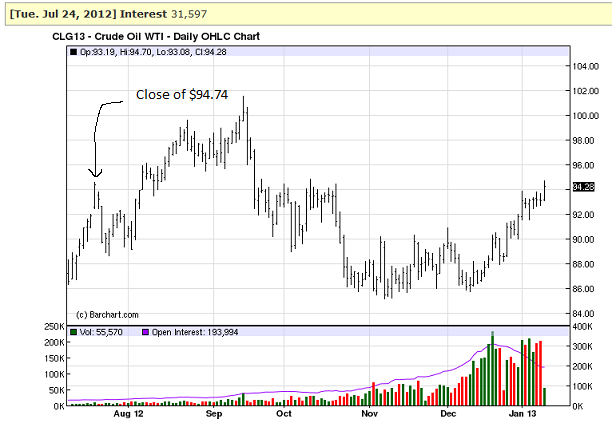 Last summer the price of oil briefly saw upward resistance at $94.74 per barrel, then retreated to lower prices before it resumed its move to just over $100 per barrel.  This is worth watching, because if closes above $94.37 in the next few days, then we could see a move back to $100 per barrel with significantly higher fuel prices to follow.

Additionally, and it should be carefully noted that the current futures contract set a closing high of $97.91 on September 17th, 2012.  If the price of oil closes above that level then it will have completed a cup pattern with a measured move to $110.31 per barrel. This puts in the price territory for dramatically increased risk of returning to the highs of 2008 for the price of oil.   For more of my thoughts on the price of oil at these levels,  please see the Sterling Weekly for February 27th, 2012.

A Few Thoughts on Thursday’s Market:  I continue to have concerns about the short to intermediate term direction of the market. I think that there is an extremely high level of political risk to the market.  I truly believe that we are on the cusp of the greatest ideological battle of our lifetime over the direction of this country through the coming fight over spending levels.  President Obama has clearly stated that he does not believe that spending is a problem.  There is a growing belief that the Democrats in Washington, DC view the fight as a way to regain control of the House of Representatives in 2014; and they are preparing to do what ever it takes to win that fight, regardless of the consequences to the country.  If that it is the case, then the economy and the markets are in for a lot of pain.