A Look at Friday’s Market:  The overall market finished Friday mixed, with the Dow Jones Industrial Average and the NASDAQ 100 finishing slightly higher, while the S&P 500 finished the day slightly lower.  A majority of the various sector indices I track finished the day lower as well.  There was weakness in the Biotech, Banking, Airlines, Gold/Silver, Oil Services, Insurance, Commodities, Consumer, and Cyclical indices.  There was strength in the Retailers, Natural Gas, Chemicals, Telecom, Transports, and the Oil & Gas indices.  The High Tech indices were mixed.

A Few Thoughts on Monday’s Market:  In looking at the charts from Friday’s trading activity, it is very clear that most of the chart patterns are bearish and continue to indicate a further pullback in the overall market.  Additionally I noticed that the Amex Disk Drive Index ‘DDX’ hit a multi-year closing low on Friday.  I’ve inserted a chart on the ‘DDX’ below for your review.  I think that their is a good possibility that the ‘DDX’ will continue to move lower test its long term support levels in the mid 40’s range.  As for the overall market, we have significant economic data to be released this week, including personal consumption and spending as well as the unemployment rate later this week.  I am not looking for any upside surprises in the numbers, and I am expecting surprises to the downside if anything.  I think the over all market is going to continue to drift lower throughout the week. 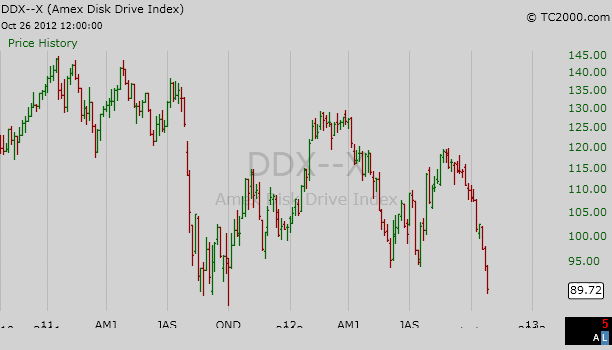