A Look at Friday’s Market:  The overall market moved sharply lower on Friday in a broad based move that saw the majority of the sector indices I track move lower as well.  There was weakness in the Gold/Silver, High Tech, Commodities, Oil Services, Biotech, Natural Gas, Chemicals, Oil & Gas, Cyclicals, Transports, Consumer, Financials, Healthcare related indices.  There was strength in the retailers.  There was weakness in the bond market as interest rates moved higher.  In the commodities markets,  Oil was lower by $2.23 to $84.86 per barrel, and Gold was lower by $40.30 to $1,675.20 per ounce.  In the grain markets, Wheat was lower by $0.04 to $8.644 per bushel, and Corn was lower by $11.40 to $7.394 per bushel, while Soybeans were lower by $0.33 to $15.266 per bushel.

A Few Thoughts on Monday’s Market:  In looking at the charts from Friday’s market it is pretty clear that the vast majority of the various indices I follow are in a downward trend.  I think the market is going to drift lower until the results of tomorrow’s election are known.  Of note, the M.S. Commodities Index ‘CRX’ closed at 829.57 on Friday and in the process broke through downside support at 833.17  I have included a chart below for your review.  I am now seeing downside support on the ‘CRX’ at 819.20 and then at 798.04, the point from which it gapped higher on the open of trading on September 6th of this year.  I am expecting the ‘CRX’ to continue to move lower and test those trading levels over the course of the next couple of weeks. 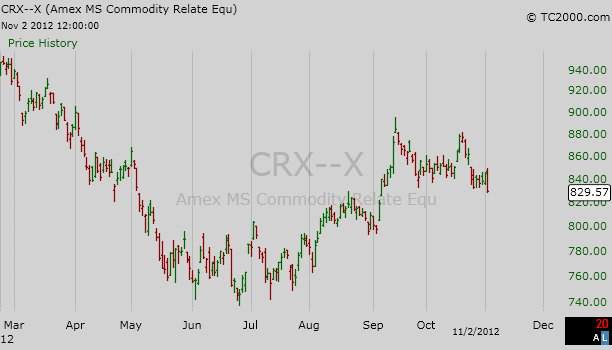