A Look at Thursday’s Market: The overall market sold off sharply again on Thursday in a very broadly based move that saw every sector index I track move lower as well. The market has clearly entered a new phase of downward movement that I expect to continue for quite some period of time.  I think that there is a very good chance that this sell off could turn into a bear market, and we could see the Dow Jones Industrial Average below the 10,900 level.  I will discuss those thoughts in greater detail in this weekend’s Sterling Weekly. I have often said that I believe the Dow Jones Industrial Average is the single best indicator of the future direction of the u.S. Economy.  I generally believe that it is the most accurate indicator at forecasting where the economy will be in 6 months.  Then based on the activity of the market over the course of the last couple of days, I would say there is a very good chance that the market is concerned that the U.S. Economy will slip back into recession in the 1st half of 2013.

A Few Thoughts on Friday’s Market: In looking at the charts from yesterday’s market activity it is very clear that the market is in sell off mode until something happens to change that.  Looking at all the changes that are set to occur in 2013, many of which have negative consequences for the economy, I do not see anything being done in the near future to fix many of the negative events slated to take place in 2013.  As a result, I am expecting this sell off to continue for quite some period of time.  I think the overall market will test the lows put in place in August of 2011 when there was the showdown in Congress over raising the debt ceiling.  If we move below that level, then I believe that we are in for a prolonged period of a sideways to downward market; most likely a new bear market. 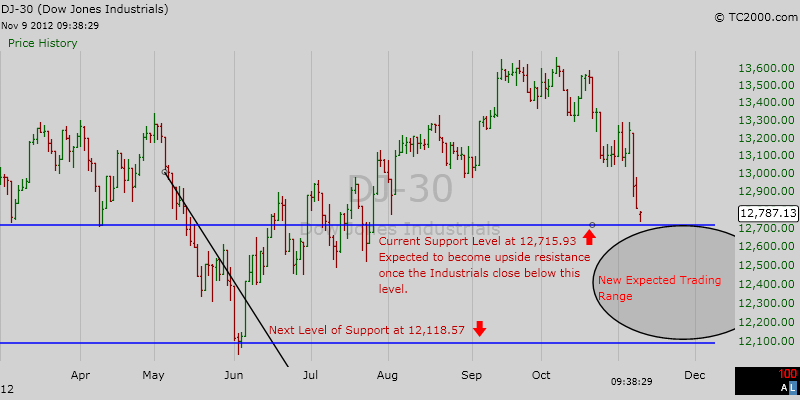 However, if the Dow Jones Industrial Average closes below 12,118.57 then it will have broken an important point of support based upon the “3 Leg Principals of Movement” (which I will discuss in greater detail in this week’s Sterling Weekly). If this happens, then this current downward movement which basically started in October will be the 1st of 3 downward movements, with each one setting lower lows.